2016 is off to a fantastic start with another magazine feature. This time in the Low Sugar Living Spring 2016 edition. A couple of exciting things to note: 1) the first recipe of the magazine is yours truly! My Chicken & Kale Linguine has a front row seat to all the action. I nearly fell out of my seat when I saw that! 2) Not only is there one recipe featured, there is a second AND a third recipe! My recipe for The Ultimate Cobb Salad and The Ultimate Green Salad are among the 127 dietitian-approved recipes!

As if the first magazine feature wasn’t exciting enough, not even a month later I had TWO magazine features side by side ON STANDS. My latest feature can be found in the Winter 2015 Giada Vegas Issue of Go Gluten Free: Winter Decadence! You’ll find my two-page spread of Hot Chocolate Macarons with Marshmallow Buttercream Frosting. Unbelievably thankful for the blessings. 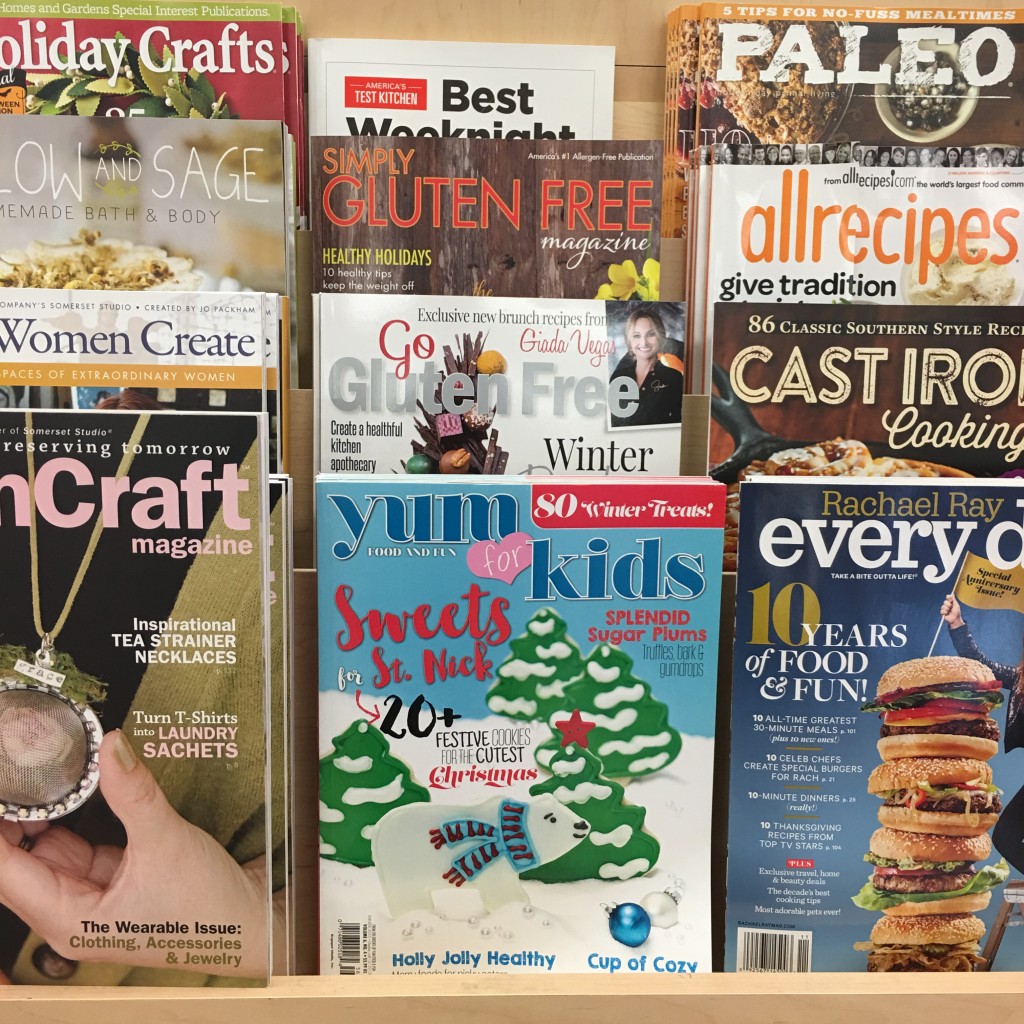 A VERY exciting milestone happened for Tried and Tasty! My very first published work is in the Yum Food & Fun For Kids Winter 2015 issue! You’ll find my Sugar Plum Thumbprints among the 80 winter treats! It’s one thing to see you’re work online, but it’s a whole new level of awesome when you see your work in print. In a magazine that anyone can buy at their local retailer! So much fun! 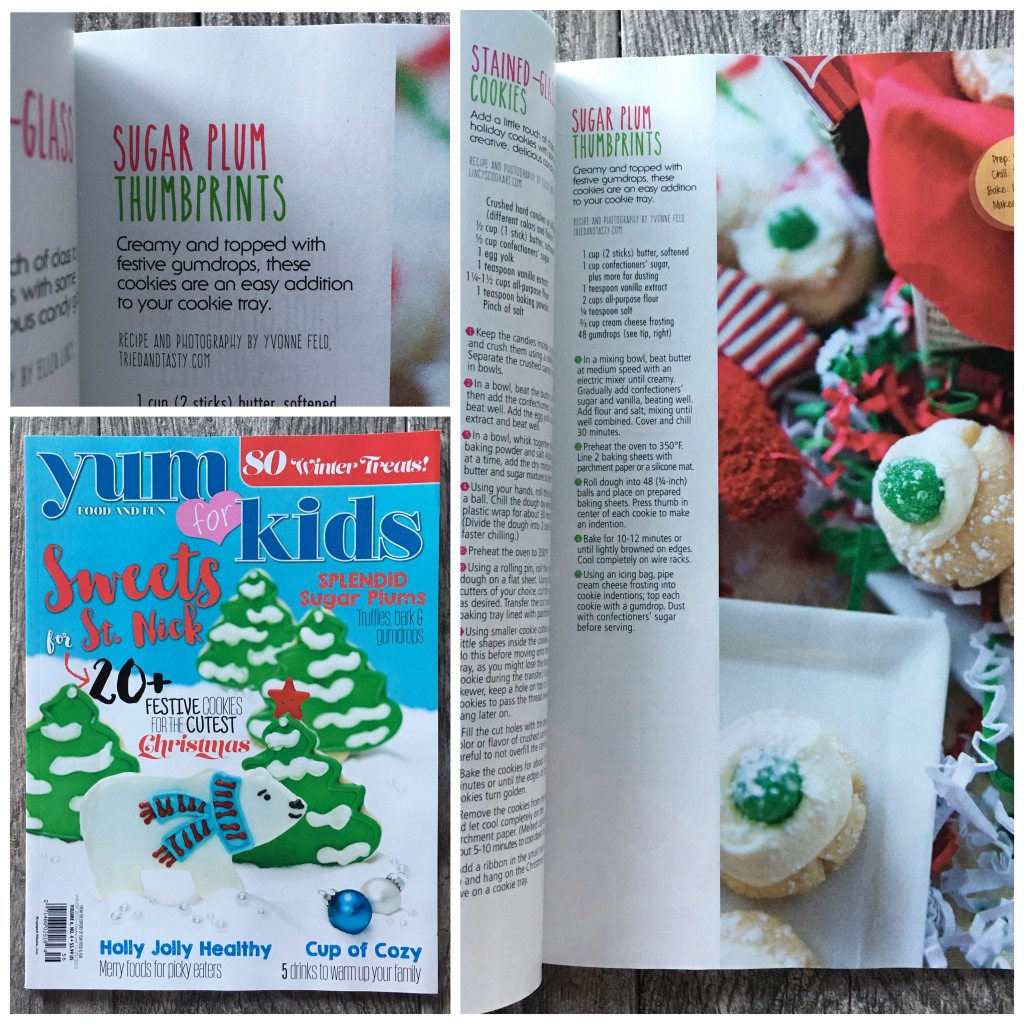 Time for another home show! On October 12th, 2015 I presented at the Deseret News Fall Home Show Where I made Festive Fall No Bake Treats during the hour. I decided to do things a little differently this time around and incorporated a game at the same time. We had a BLAST!!! I almost couldn’t concentrate on my food because I was having so much fun with the crowd. One of my best friends Natalie was my right-hand gal and helped make ‘The Family Food’ based off the hit television gameshow The Family Feud a success! A VERY special THANK YOU to Rhodes Bake N Serv and IKEA Draper for providing the generous prizes! I made my No Bake Pumpkin Cheesecake Icebox Cake, No Bake Caramel Apple Icebox Cake, and 3-Ingredient Pumpkin Dip. I ran out of time and couldn’t make my No Bake Pumpkin Cheesecake Parfait. If you’d like to see the show, you can view it here, we started filming about 10 minutes into the presentation. 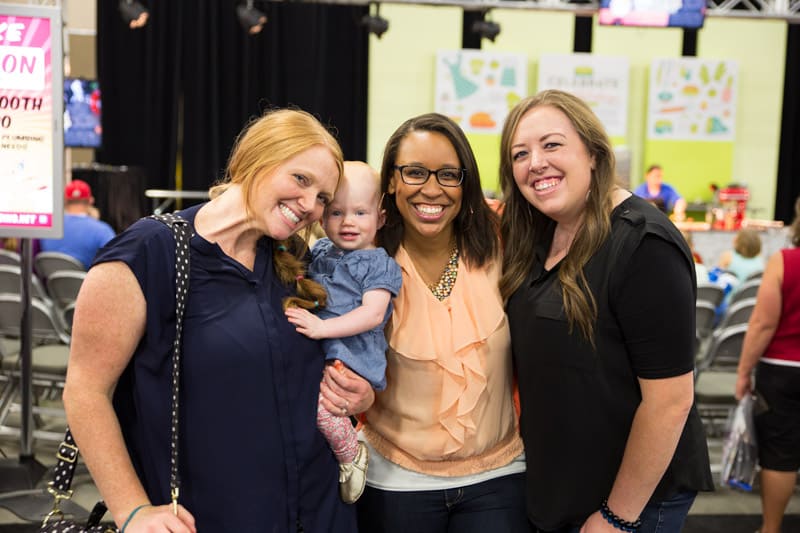 One of my favorite appearances to date was on March 11, 2015 at my old college stomping grounds: Weber State University! I was asked to present on the importance of planning quick & healthy breakfast options for Employee Learning Week. I made five simple recipes: Honey Almond Granola, Fruit & Yogurt Breakfast Parfait with Honey Almond Granola, Strawberry & Banana Overnight Oats, Chia Seed Pudding, and my Orange Banana Breakfast Smoothie. Every year during Spring break the professors have a week of learning many different things. I’m so grateful I got to be a part of it this year. If you feel so inclined, you can watch the recorded presentation: here. 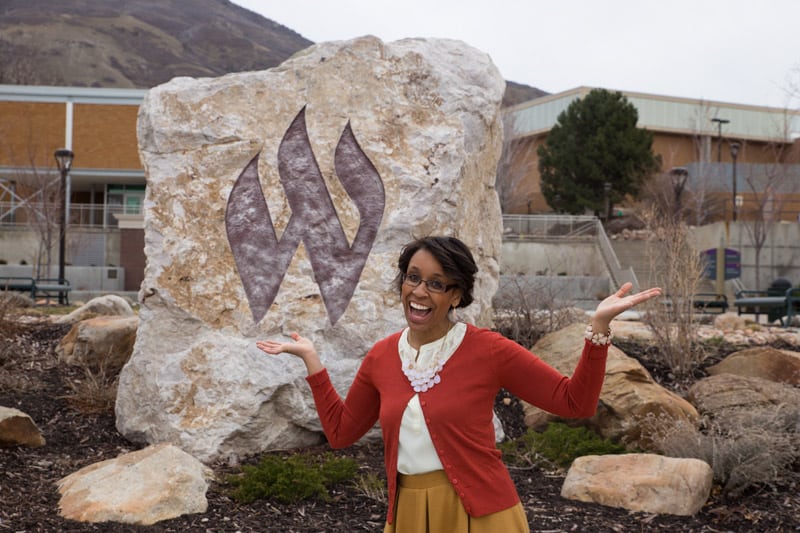 I had the pleasure of presenting at the IKEA BYOF (Bring Your Own Friend) event on March 7, 2015 for the second year in a row. I absolutely love working with IKEA, not to mention our house is decked with IKEA all throughout. The test with this particular demo is that there are no heating elements & the presentation is only 30 minutes. So I came up with my No Bake Chocolate Icebox Cake recipe. I was able to use all IKEA products AND prepare a delicious dessert in less than 30 minutes. From the mmm’s and yum’s of the crowd, I think they liked it. If you’d like to see my recorded presentation, you can watch it: here. 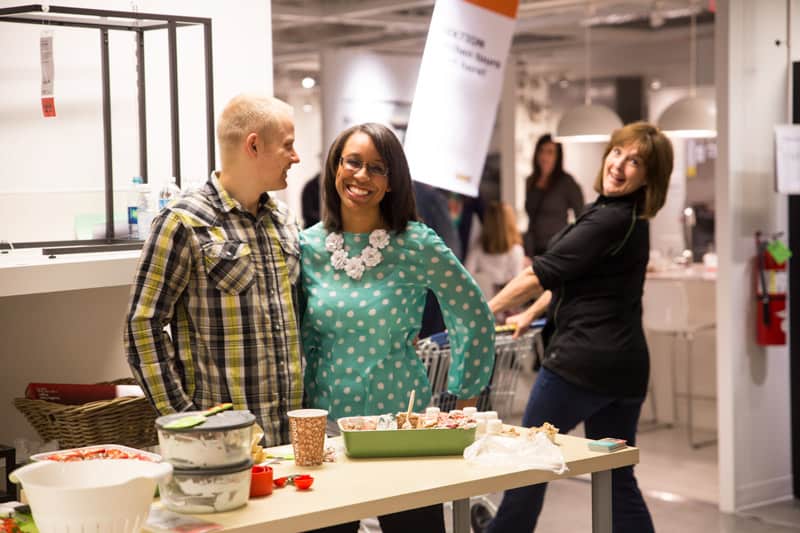 As if IKEA weren’t enough, I decided to add in yet another appearance that very evening at the Salt Lake City Home & Garden Festival. In the hour I made four recipes to showcase how you can begin your day with a quick & healthy breakfast. I had an absolute blast whipping up tasty food and giving away fun prizes. I think it’s safe to say a good time was had by all, and it may have been my biggest crowd yet (free stuff really brings people in!). I made my Orange Banana Breakfast Smoothie, Honey Almond Granola, Fruit & Yogurt Breakfast Parfait with Honey Almond Granola, Strawberry & Banana Overnight Oats & Chia Seed Pudding. You can watch the recorded presentation: here. 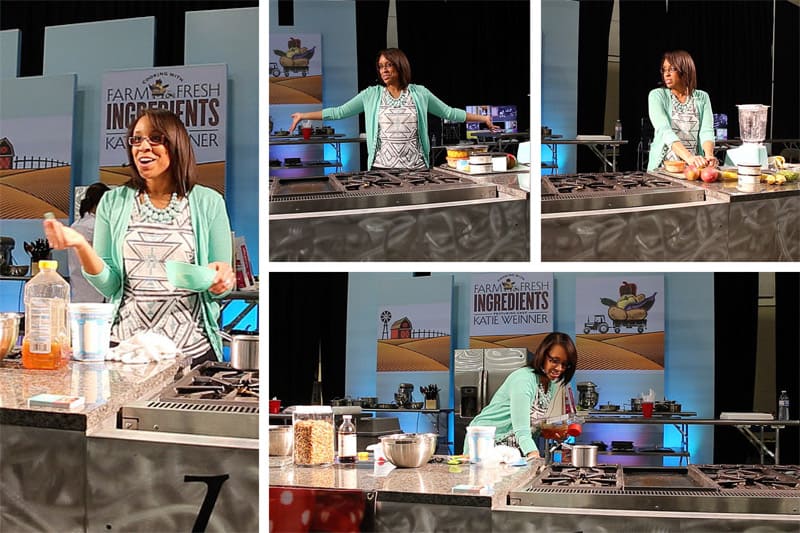 Ever heard of the Pinners Conference & Expo? The conference is marketed to women of all ages, inviting them to gather for classes based on popular Pinterest trends — crafts, cooking, photography, fitness, beauty, etc. Basically, it’s like Pinterest has come to life right before your very eyes! On Friday November 7th, 2014 I presented a class on ‘Copycat Recipe Favorites’ where the description of my class was ‘Why go out when you can stay in? In this fun class you’ll learn to make many popular restaurant favorites in your own kitchen!’ I made my Copycat Cheesecake Factory White Chocolate Raspberry Cheesecake (which was a hit) and my Copycat Orange Julius (which was an even bigger hit). There was a fun time had by all at the conference, You can find a complete recap of the event in my Tried and Tasty @ Pinners Conference 2014 post! 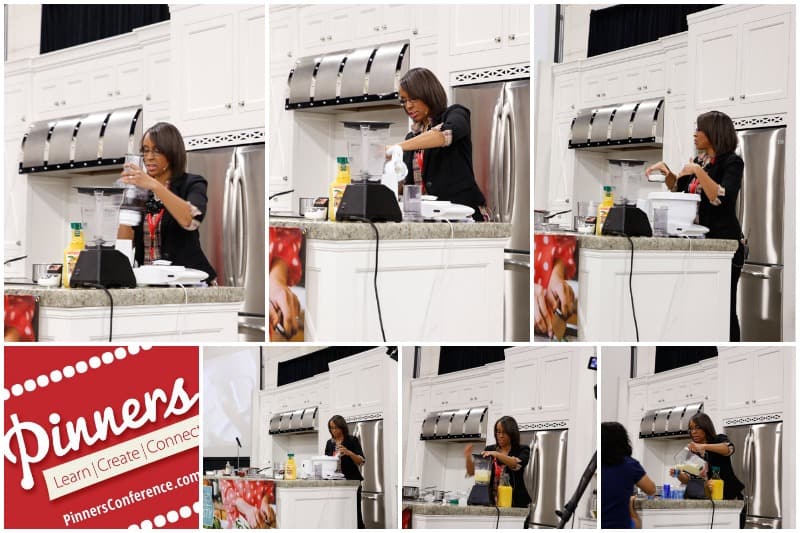 On April 23rd, 2014 I was invited to film with My Recipe Magic, the website brought to you by Six Sisters Stuff. I filmed a short video of how to make my Very Berry Salad with Honey Sweetened Raspberry Vinaigrette with Darin Adams the former co-host of KLS’s Studio Five! It was so much fun! We filmed in the most gorgeous Ivory Homes model home (now I know exactly what I want my house to look like, and more importantly my kitchen!). The video should be available soon, watch for that – it was so fun to film! 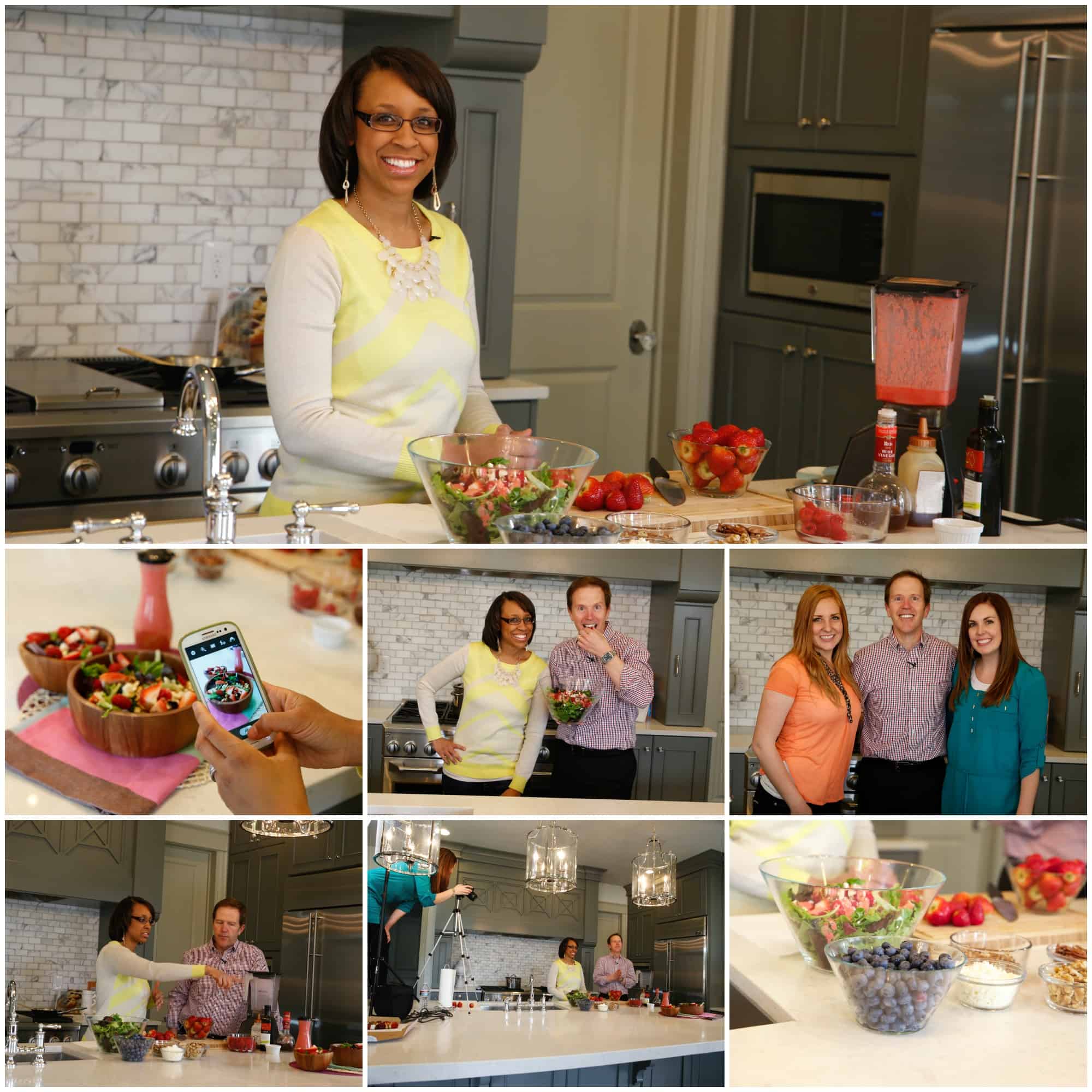 When IKEA asked if I wanted to participate in the 3rd Annual 2014 BOYF Event  on Saturday March 8th, I was ecstatic! I absolutely LOVE IKEA and have many of their wonderful products in my home. Many of their kitchenwares can be spotted in a lot of my food photography. They’ve got so many fun things, I have a hard time not buying them all. I demo’d my delicious Candy Bar Caramel Apple Salad – which was a HIT! 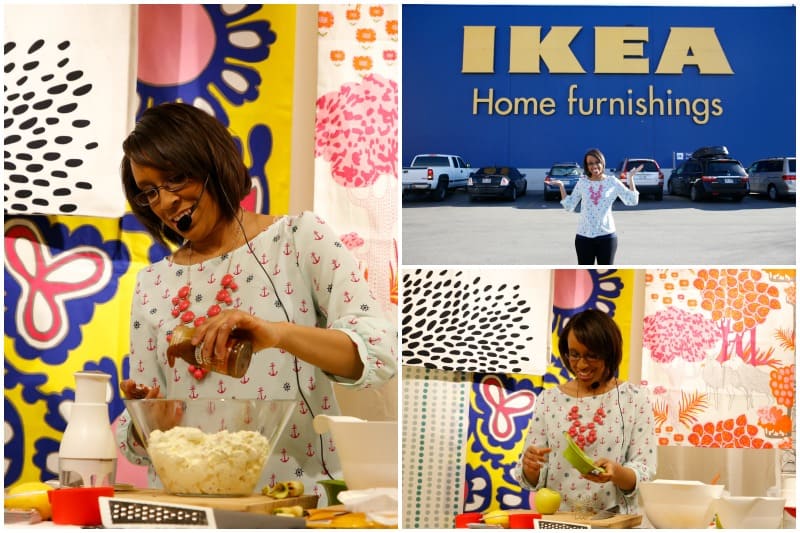 On Sunday March 9th, 2014 I had another amazing opportunity to be a guest chef at the Salt Lake Tribune Home & Garden Festival. My theme for the hour was “a delicious three course meal, using five ingredients per course!” I started with Magleby’s Rolls using Rhodes Rolls, the main course was my Two-Timin Pasta Bake, and finished the meal off with this delicious Pineapple Fluff Trifle. Oh and I can’t forget, I finished off with my Virgin Sangria (that I made that morning)! I also got to meet the fabulously RAD Emily Ellyn (you may know her from the Food Network Star!). She was absolutely adorable! 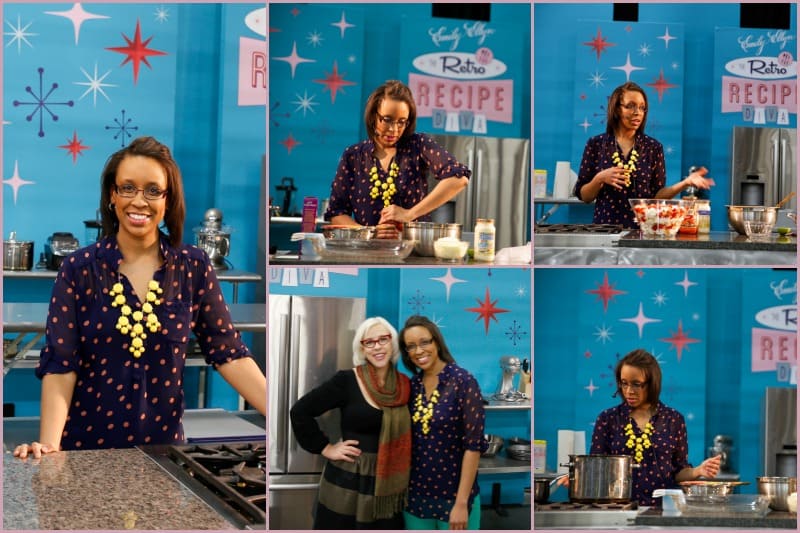 I had the privilege of giving a live one-hour food presentation on healthy desserts at the Deseret News Home Show in October 2013. I showed just how easy it is to make Healthy Chocolate Zucchini Muffins and Coconut Oil Chocolate Chip Cookies. Each are wonderfully tasty! 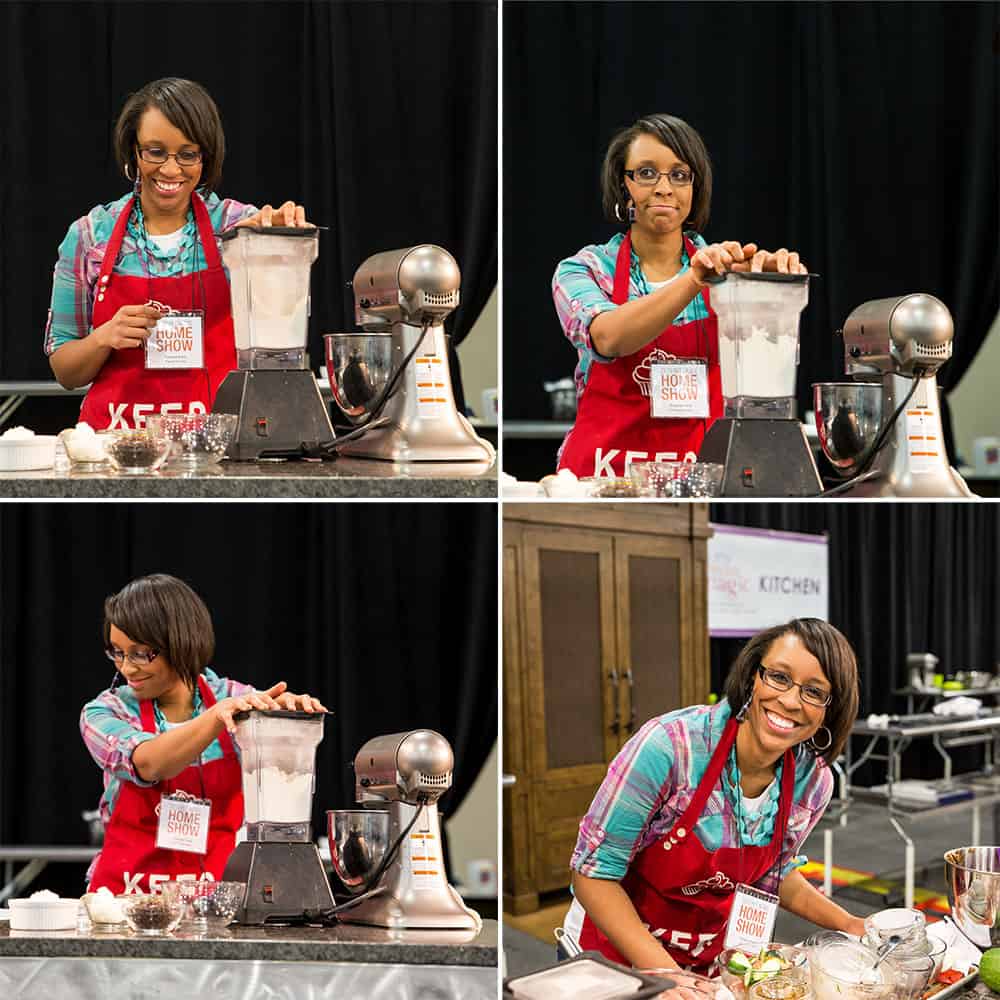 Several of my recipes have also been featured around the web. So grateful for other bloggers willing to share my passion! Check out these other fabulous websites where I’ve been featured:

Welcome! I'm so happy you are here. My name is Yvonne Feld and I love to slice, dice, bake, shake, cook, and sprinkle! I love having fun in the kitchen and hope you'll come along. Tried and Tasty is a place for me to share my passion with you. If I Tried a recipe and thought it was Tasty, you'll find it here!
Meet the Cook
FAQ's & Fun Facts
Appearances and Features
TV Spots 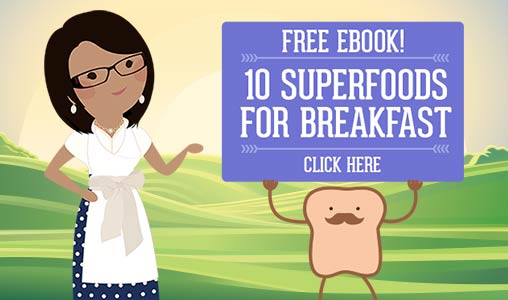 Want to feature one of my recipes on your website? I'm flattered!
Here's the fine print:
Tried and Tasty, LLC only allows one photo with a direct link back to TriedandTasty.com to be used when featuring a recipe from its website. You may not use more than one photo or use a post in its entirety without direct written consent from Tried and Tasty, LLC. Please Do not crop, edit or remove or add any watermarks to the photos. You may write a brief description in your own words, but you may not copy any of the steps from the recipes. Each post on TriedandTasty.com is copyright protected. If you have any questions concerning this content & photo sharing policy, you may contact TriedandTasty.com here.

Affiliate Disclosure
This website contains affiliate links. I include these links to help you find either specific {or my favorite} products that are used in my recipes. If you purchase an item from the link on Tried an Tasty, I will receive a small commission helping keep my recipes free for you. Thank you for your support!

Tried and Tasty, LLC is a participant in the Amazon Services LLC Associates Program, an affiliate advertising program designed to provide a means for sites to earn advertising fees by advertising and linking to amazon.com
Proud to be featured on:

Welcome! I'm so happy you are here. My name is Yvonne and I love to slice, dice, bake, shake, cook, and sprinkle! I love having fun in the kitchen and hope you'll come along. Tried and Tasty is a place for me to share my passion with you. If I Tried a recipe and thought it was Tasty, you'll find it here!

Copyright © 2019 Tried and Tasty, LLC - All rights reserved.
MOST POPULAR RECIPES
Hamburger Casserole
Cheesy Baked Dip
Creamy Chicken Casserole
Chocolate Zucchini Muffins
Cake Batter Cookies
Cream Cheese Wontons
Chicken & Spinach Wrap
Affiliate Disclosure
This website contains affiliate links. I include these links to help you find either specific {or my favorite} products that are used in my recipes. If you purchase an item from the link on Tried an Tasty, I will receive a small commission helping keep my recipes free for you. Thank you for your support!

Tried and Tasty, LLC is a participant in the Amazon Services LLC Associates Program, an affiliate advertising program designed to provide a means for sites to earn advertising fees by advertising and linking to amazon.com