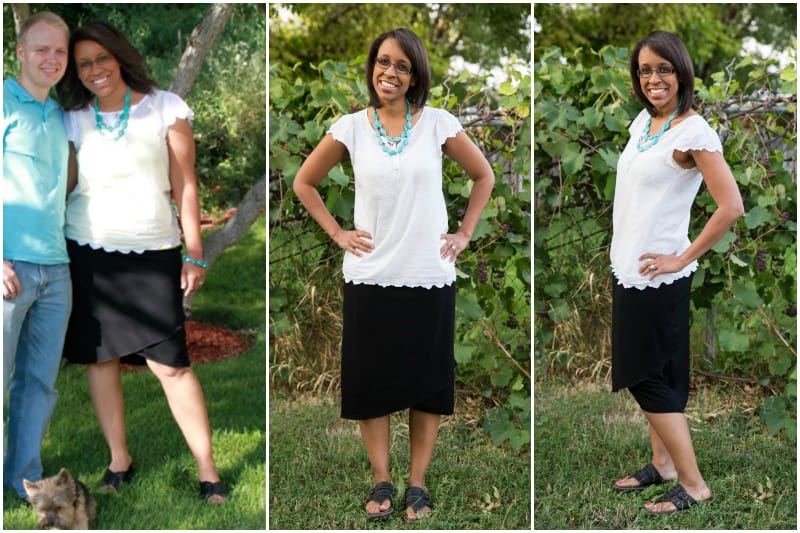 Let’s face it.
I love food.

I’ve loved food for as long as I can remember. What can I say? My mom is an excellent cook.. who came from parents that were great cooks. Delicious eating runs in my family.

Do I have a favorite meal, type of food, or food group? I would say not necessarily.
I have an insanely intense sweet tooth. Like. I’d give my right arm for a warm brownie and ice cream. Seriously. Don’t tempt me.

Am I picky? I would say no to that as well. I’ll try just about anything once.
Like sushi for example. I was anti-sushi for a lot year years. Now? Now you can’t keep me away from it. 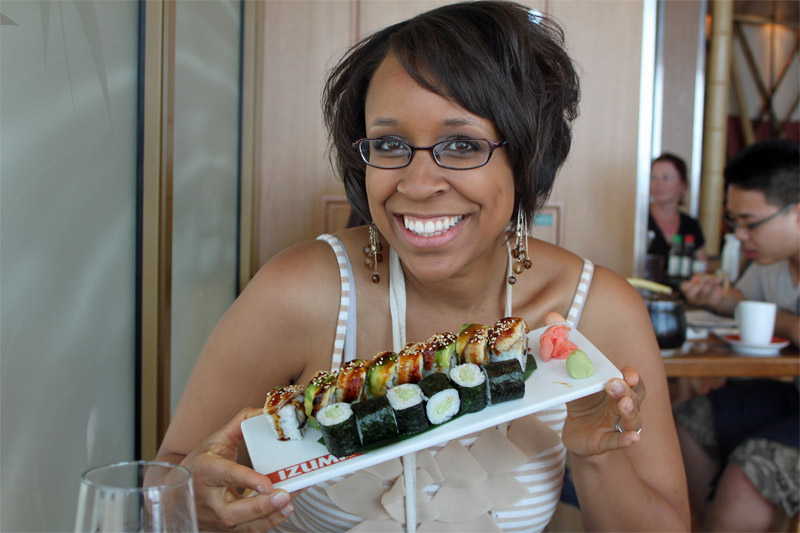 So what happened? Honestly it’s hard for me to pin down the exact moment where things started spiraling downward. My love of cooking started shortly after I graduated high school, but I didn’t really get too serious in the kitchen until I moved out on my own. When I turned twenty-three(ish) it was no more of mom’s cooking I could depend on. It was time for me to spread my wings and fly [in the kitchen]. It was then that I learned that I loved not only cooking for myself, but really started developing a passion for cooking for others.

With the freedom to cook whatever I want, came the freedom to make all things unhealthy. My roommates and I would love to make comfort foods and desserts. Especially desserts. I lived with roommates for about a year and a half or so. Moved back home, then turned around and moved out on my own. While on my own, I made a decision to get healthy. I joined a gym and started going pretty frequently. I even signed up for a “biggest loser” competition. I did really well and lost a little over 11 lbs.

A couple of months later when I was least expecting it [you know what they say] I met the man of my dreams. We fell in love, we got married, and I gained 20+ lbs. 20 lbs turned in to 30 lbs. It was at that point that I decided something needed to give. I loved cooking, but my style of cooking and Steve’s ultra healthy lifestyle didn’t exactly pair all too well. He’d eat what I made, but deep down I know he longed for me to see the light just as much as I longed to see it myself. 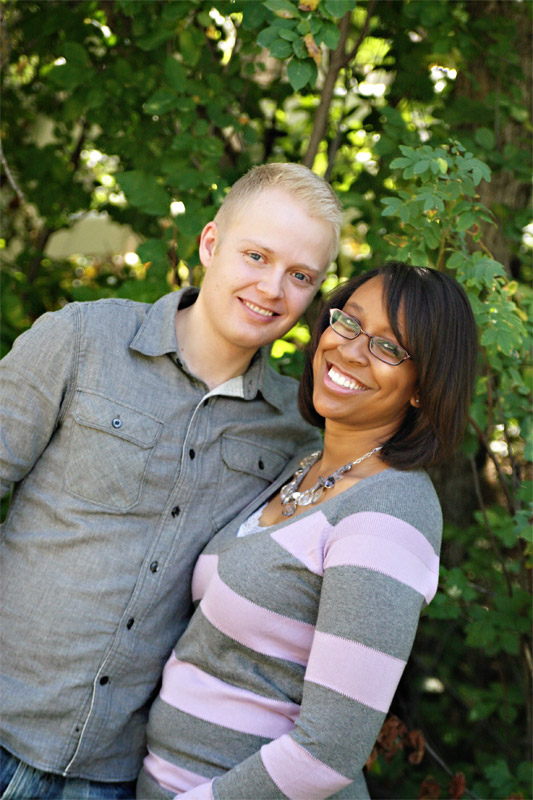 Everyone has that one photo. OK, not everyone. But many people have that one photo. You know the one. The one that was taken of you and you look at it in disbelief that it’s you. Yes, that one. I think about my photo all of the time. I think to myself. How did I let myself get this way? How did I lose control so much so that I nearly became someone else? I actually have several photos.

For whatever reason a year or so ago I found myself really in to food documentaries. I was mesmerized about learning where my food comes from, how animals are treated, and what the money-makers want you to believe about food, or rather more of what they don’t want you to know. January of 2013 I watched the one documentary that woke me up. Not because it was new information or a news flash to me. But more because it was one of those ‘right place at the right time’ kind of type of things. Hungry for Change

. I watched it alone, then the next day made Steve watch it with me, and the weeks to follow recommended it to anyone with a Netflix subscription that wanted to wake up like I had. 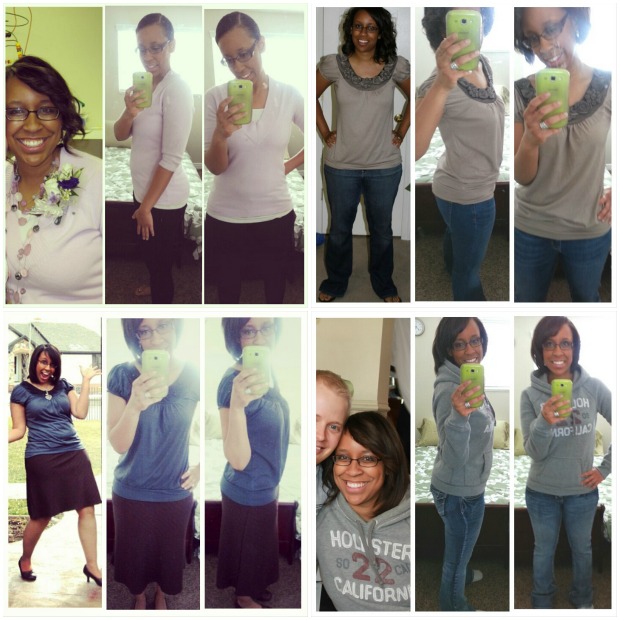 Along with several other factors, watching Hungry for Change

ultimately led to our decision to complete a 30 day juice fast as well as cleanse of our liver, colon, and kidneys. On January 10th 2013 we embarked on our adventure which ultimately helped redirect my thinking towards food. It’s hard to believe we lasted the entire 30 days. It was challenging, it was exhausting, and it was expensive, but every red cent that was spent and every single day was 100% worth it to us. Through the juice fast I was able to drop 14.8 lbs. and 8.75 inches. I felt amazing and knew that with a fresh start it was going to be the year that everything changed.

Well, there were some things that changed I’ve stuck with. But there were also some things that I just couldn’t drill through my noggin. I gained a little bit of the weight back, but still worked decently hard to stay in shape for a vacation that we had last May. Once home from the vacation the number on the scale continued to climb. Around mid-September I was approached by my friend Kami who runs the website ‘No Diets Allowed’ she had caught wind of my health craze at the beginning of the year, juice fast, and cleanse and wanted to know if she could spotlight me as a motivation for others.

Cue wake up call #2. I was so embarrassed. I had gained back all the weight that I had lost from the fast, I had let go of some of the principles that had previously convicted me before, and it seemed I was right back where I started. When I emailed her back to let her know I wouldn’t necessarily be the right person to spotlight because I hadn’t continued ‘walking my walk’ I was so ashamed. It was then that she introduced me to a challenge that has changed my life. The Game On Health Challenge. A competition between those looking to get healthy, reach goals, and succeed in a friendly competition. On a whim I signed up only a day or two before registration closed. Who knew that would be the turning point for me? 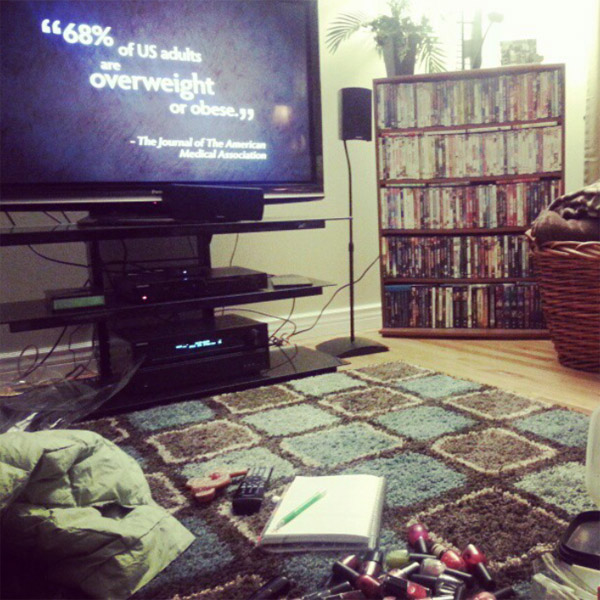 It was in that moment I realized I was finished treating my body with disrespect and started realizing that I owe myself more than that. For the challenge you are divided in to teams and compete against other teams by earning points on a daily basis. I was put on a team of strangers essentially. I knew Kami (but we’d never met in real life). All I knew was that I was going to try my hardest not to let my teammates down. Week after week as I continued to work hard, it not only benefited my team but I found that it was benefiting me. At the end of the six weeks our team came in 2nd place BUT I ended up being the competition ‘biggest loser’. In six-weeks I lost 5.1% of my body weight, 8.6 lbs, and overall 7.5 inches! I couldn’t have been more proud of myself.

I wasn’t ready for the challenge to end. I became really close to my teammates and we helped each other reach for and achieve our goals. I knew that heading in to the holidays I wasn’t ready to tackle the world on my own. So I signed up for the next challenge that began November 18th and ran through Thanksgiving and Christmas. It was exactly what I needed. Structure over the holidays. While most everyone was gaining weight over the holidays I was determined to lose weight. And that I did. At the end of the 2nd round, my team came in first place. I lost a total of 9.4 lbs, 5.84% body weight, AND 6.75 inches overall. Over Thanksgiving AND Christmas I lost almost 10 lbs. Can you believe that?

I was on a roll, and decided to once again sign up for the challenge. It had proven effective twice before, why not continue the momentum. So, on January 6th 2014 I signed up for my third (and final) challenge. To date, I am down 36 lbs. I’m less than 15 lbs. away from my goal weight. I feel amazing. Here’s what I’ve learned:

If I can do this, anyone can do it. There are lots of great resources here on Tried and Tasty to help get your kitchen on track first and foremost. It’s been said that weight loss is 30% gym and 70% diet. Once you get your eating under control, it will get easier. Everything will begin to fall in to place. My journey doesn’t have a time limit. It is something that I will be working at every day for the rest of my life. It will be worth it.

Welcome! I'm so happy you are here. My name is Yvonne Feld and I love to slice, dice, bake, shake, cook, and sprinkle! I love having fun in the kitchen and hope you'll come along. Tried and Tasty is a place for me to share my passion with you. If I Tried a recipe and thought it was Tasty, you'll find it here!
Meet the Cook
FAQ's & Fun Facts
Appearances and Features
TV Spots

Want to feature one of my recipes on your website? I'm flattered!
Here's the fine print:
Tried and Tasty, LLC only allows one photo with a direct link back to TriedandTasty.com to be used when featuring a recipe from its website. You may not use more than one photo or use a post in its entirety without direct written consent from Tried and Tasty, LLC. Please Do not crop, edit or remove or add any watermarks to the photos. You may write a brief description in your own words, but you may not copy any of the steps from the recipes. Each post on TriedandTasty.com is copyright protected. If you have any questions concerning this content & photo sharing policy, you may contact TriedandTasty.com here.

Affiliate Disclosure
This website contains affiliate links. I include these links to help you find either specific {or my favorite} products that are used in my recipes. If you purchase an item from the link on Tried an Tasty, I will receive a small commission helping keep my recipes free for you. Thank you for your support!

Tried and Tasty, LLC is a participant in the Amazon Services LLC Associates Program, an affiliate advertising program designed to provide a means for sites to earn advertising fees by advertising and linking to amazon.com
Proud to be featured on:

Welcome! I'm so happy you are here. My name is Yvonne and I love to slice, dice, bake, shake, cook, and sprinkle! I love having fun in the kitchen and hope you'll come along. Tried and Tasty is a place for me to share my passion with you. If I Tried a recipe and thought it was Tasty, you'll find it here!

Copyright © 2019 Tried and Tasty, LLC - All rights reserved.
MOST POPULAR RECIPES
Hamburger Casserole
Cheesy Baked Dip
Creamy Chicken Casserole
Chocolate Zucchini Muffins
Cake Batter Cookies
Cream Cheese Wontons
Chicken & Spinach Wrap
Affiliate Disclosure
This website contains affiliate links. I include these links to help you find either specific {or my favorite} products that are used in my recipes. If you purchase an item from the link on Tried an Tasty, I will receive a small commission helping keep my recipes free for you. Thank you for your support!

Tried and Tasty, LLC is a participant in the Amazon Services LLC Associates Program, an affiliate advertising program designed to provide a means for sites to earn advertising fees by advertising and linking to amazon.com