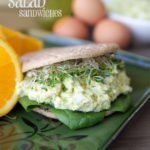 This Avocado and Egg Salad Sandwich is a healthier alternative to the classic!

[My 2 Cents]
I recently posted in my Kitchen Basics how to sprout your own alfalfa sprouts. I used our fresh homegrown sprouts for this recipe. It's so nice to just have them available whenever you want them and not have to pay an arm and a leg for them. It's SO easy, if you like sprouts I highly suggest getting a sprouter and some seeds and growing them yourself. You can have them all year long! We are also sprouting for the first time broccoli sprouts - I'm interested to see how those turn out!
Did you know that you can hard boil an egg in the oven? Ever since I found that out it's been the only way that I've been doing it since. I love not having to babysit the boiling water and making sure I start the time when I'm supposed to (I've never been good at boiling eggs). Plus, with the oven method you can boil a bunch at the same time with ease. There are many how-to's online, here's one. I like to boil about a dozen at a time and keep them on hand for a quick snack.
Let's talk bread. We only ever buy whole wheat/whole grain. Normally it's the Dave's Killer bread from Costco, but since I'm being calorie conscious it's hard to cough up over 100 calories per slice of bread for me. When discovering the multigrain thins I was ecstatic. I still get to have bread, just less of it and for only 100 calories per thin I can afford to have it and still have a great sandwich. We buy our multigrain thins from Costco. I have made breakfast sandwiches with them, I've make turkey/cheese sandwiches in the waffle maker, and grilled cheese sandwiches. Still being able to have a great meal but not sacrificing a large portion of my daily calories is really important. The thins allow me to do both!