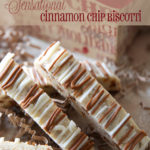 These Sensational Cinnamon Chip Biscotti are one of the prettiest biscotti I've seen!  Enjoy with some hot chocolate or a hot cup of coffee!

[My 2 Cents]
I couldn't stop taking pictures of these because they are just so darn pretty. I love when food is photogenic. It makes my job easy and hard at the same time. Easy because I don't have to get fancy with lighting and things but hard because I take a zillion pictures and then it's hard to narrow down to just a handful.
When cutting the biscotti into slices you will want to be gentle. Because it hasn't baked hard it's still soft enough to break. If you aren't careful the slice will easily break in half. Also be careful as you are transferring from the cutting board back to the cookie sheet. You'll want to store these in a covered container, but doesn't necessarily need to be air tight. I just loosely covered my biscotti on a plate with press-n-seal wrap.
You can serve these with a hot beverage if you like (hot chocolate or coffee perhaps) but I enjoyed it straight up plain and simple. I had to restrain from not eating the entire batch of them because they were so darn delicious. Not only do they taste simply wonderful but they also SMELL out of this world. Have I convinced you yet? I'm telling you. You'll love them. I had to hit up a couple of stores to find the cinnamon chips. I think I ended up finding them... oh geez. I don't remember! I want to say I found them at my local Harmon's grocery store. I think they are seasonal so if you want to make these you better snatch some of those cinnamon chips (made by Hershey's) before they yank them off the shelves. Run.