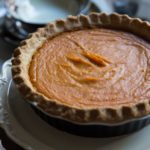 This sweet potato pie is legendary and has been passed down from my grandfather and grandmother to my own mother and now to me. This is the MUST HAVE recipe of the fall season that can be enjoyed for Halloween, Thanksgiving, and any other day of the year!

When initially blending the sweet potatoes you will want to use a high speed blender instead of a hand mixer. The initial blending will remove the sweet potato strings. By using a hand mixer you will not remove them, therefore the final result of your pie will not be as creamy as it could be. Also you can use regular milk, but will have better flavor and results if you use the evaporated milk.

Adapted from A family recipe from my Mom